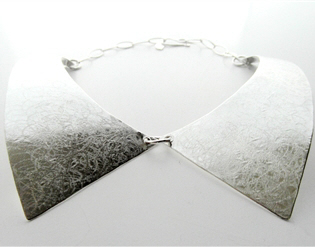 The Silver Collar puts a touch of dramatic elegance to even the most casual outfit. Whether you are wearing it in the daytime or evening the Silver Collar can be fashionably inspiring.

Greta Garbo was born September 18, 1905 in Stockholm, Sweden. A reclusive star, Garbo began her career in Europe before coming to the United States to work for MGM when she was 19. Her sensual, mysterious look made her a hit with American audiences, both in silent and sound films before World War II. She died in New York City in April 15, 1990.